For a while now, I have been hearing a lot about doTERRA oils. I first heard about them when a friend of mine in Canada posted about them on FaceBook, probably a year or so ago. To be honest, I liked the post but didn’t look into it. My thoughts were “I’m glad she has found something that works for her”. I wasn’t thinking “what is that?” 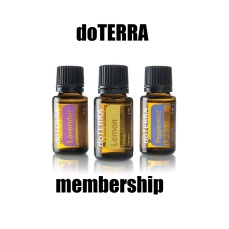 Then one day, my sister took me with her to this lady’s house who sold oils. She said she had won a free membership and was getting some introduction to it by this particular lady. I can’t remember why I was with my sister this day, but there I was, tagging along for this introduction session.

The free membership my sister had won was with doTERRA. There was that name again. My ears pricked up at the familiar name and I paid a little more attention. While we were there, I checked out the oils. There were heaps! My mind was overwhelmed with what I was hearing, and thought that all this was too complicated and I wished my sister success in her new venture. I suppose I saw it a little like another one of those party plan things, like Tupperware or Mary Kay Cosmetics. There was no way I was going to take it up.

Time went on, and my sister started using her oils. She was finding relief from her chronic condition. My

interest increased at this knowledge. I wanted to know more. In addition, I started to take more notice to my Canadian friend’s posts about the doTERRA oils she uses and her enthusiasm for it.

My international friend suffers from another form of chronic condition. I know exactly where she was with it while she lived in Australia. To hear that two people I care about and knowing what their chronic conditions are, who were being helped so much with these oils, was nothing short of amazing! No, it was a miracle that these wonderful ladies were finding relief from natural pure oils where traditional medicine had failed. Nothing had previously worked for them. Now they were both using this doTERRA stuff and they were able to do things they previously couldn’t do because of their chronic conditions which consisted mostly of living with pain.

So, being armed with this knowledge concerning my friend and sister, I became very interested in finding out more about doTERRA.

Then about a month ago, my sister held a doTERRA class at her place. The lady I had visited with my 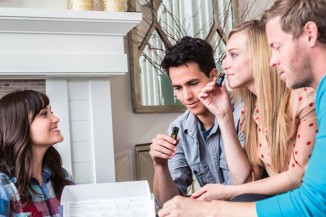 sister when she had won the membership was the consultant conducting the class. Due to the successful health benefits my friend and sister had gained, you couldn’t keep me away.

As is increasingly becoming my thing (but I really don’t know why), I rocked up half an hour late. The consultant kindly recapped what she had said to the others before moving on with the class. It definitely was not party plan, and it was so fascinating! All the health benefits. All the ailments they can be used for. The combinations which can be created. Endless! The class won me over and I signed up. There was no way I was going to pay full price for the oils, especially when I can get one of them for free when putting in my order.

I left the doTERRA class with a free wild orange oil just for attending, and a little bag containing tiny oils due to having booked my own class to be held a few weeks later. It was exciting! 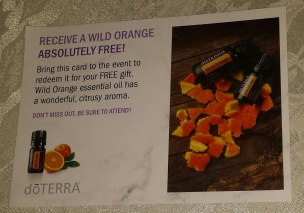 However, I kept forgetting to invite people to the class. It was almost the 13th hour when I finally got around to creating an event on FaceBook and invited people. I invited 200 plus friends. Not sure where they would have all sat if they all decided to come, but that was never going to happen. The law of averages is for every 100 people you invite, five will accept. Ten people including me attended my party. Compared to my party plan host days so many years ago, that’s the best turn out I have ever had. There is a lot of interest out there and I think a second class is on the cards.

It turned out that the tiny oil jars were so I could make something using them to demonstrate how they can be used in food. This was going to be interesting. I haven’t cooked cakes or the like for over ten years! I was certain I would stuff it up.

A couple of days before my doTERRA class, I decided what I was going to make – cupcakes, but I didn’t want it to just be cakes. I needed to have a second thing to offer my guests. The day before my party, I found a recipe for a slushy drink which was simple to make. 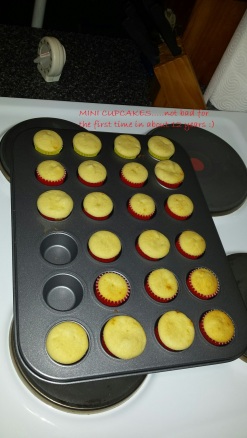 Friday night was spent making mini cupcakes. Far out they were time consuming! With the help of my trusty boyfriend, we worked as a team and conquered them. There were, of course, a few rejects which didn’t quite qualify to be called mini cupcakes and so were sacrificed for the taste testing. We made over 100 mini cupcakes with about 90 surviving the process.

Saturday was spent cleaning up. Then it was time to make the icing to go on these mini cupcakes. I thought this part was going to be easy. How wrong I was! I couldn’t remember how to make icing! What I did create was a glaze, not icing. My boyfriend googled it and I tried again. Nope, that was a fail too. I needed a saviour right about then.

Then in walked my other sister, the dessert Queen. She saved the day! It was perfect timing. In no time at all, all 90 or so mini cupcakes were iced and put in the fridge before all the guests arrived. Left to my own devices, I’d have been still trying to ice them when the class was over and everyone had gone home!

The oils I used to flavour the icing were peppermint, wild orange, lemon and lavender, and were coloured to match.

Everyone who attended the class enjoyed it. By the end of it, everyone was excited about the doTERRA oils and the multitude of benefits of using them. The fact that a lot of these oils can be digested due to their purity, has grabbed most of the people’s attention.

Needless to say, my mini cupcakes were a real hit. Not a single one left to even have for dessert that night. The slushy, using the lemon oil, was a big hit too.

Today, I took the Digest Zen and peppermint with me to work. For a while now I have been experiencing indigestion, and extreme tiredness. I was informed that peppermint can be used to wake you up, and the Digest Zen is for things like indigestion. So, using the necklace I got as a thankyou gift for holding the class, I put a drop of peppermint on it. I only got noddy about 2pm, and after topping up the necklace with the oil, didn’t have any more nodding off. Tonight, the indigestion showed up after dinner. I put a drop on my thumb and put it against the top of my mouth for a few seconds. Within a minute, the pain had gone.

There are countless testimonies from people using the oils and how they have helped them. I know I am a fan for life. If I can get away with using the oils over traditional medicine, then I definitely want to take that opportunity. There will always be a place for traditional medicine as just like medicine, oils don’t work for everyone and can’t make any claims on being a cure. However, experience of the oils will speak for itself.

Nature has given us all we need for our health. It has been used for centuries by the Chinese, for example, and we use it everyday, including the medical community. But we westerners are only just getting our heads around it now. Most of us are wanting to go back to the grass roots regarding health and being more natural in our choices. DoTERRA offers that option. DoTERRA makes it easy.

What this whole journey of discovery over the last year has taught me, is there is more available for

treating ailments than we realise or are told. On top of all of that is the fact that in the long term it is a cheaper way of achieving our desired health goals. We hear about alternative treatments and herbal treatments but nothing about oils. It may even benefit being used in conjunction with traditional medicine to help reduce how much you need to take.

There is only one way to find out.

If you would like to know more, don’t hesitate to contact me via here, or email me at allisonroseclark@outlook.com and I will endeavour to help you best I can. Alternatively, you can go to my doTERRA site https://www.mydoterra.com/allisonclark28/#/.