We all have them.

And they aren’t fun.

Arguments and disagreements are never enjoyable. Unless of course you are a narcissist, then it may be a different story. However, the average Jo Blow is not entertained by such destruction.

Every time there is a fight, whether physical or verbally, there is always someone who gets hurt. And that is despite intentions. It is inevitable that violence in any form is going to end up with someone needing consoling to varying degrees.

Yes, being a keyboard warrior does not exclude anyone from being abusive. Words in the verbal and written forms are equally as damaging as each other. The only difference is the written word is often misinterpreted or miscommunicated.

An individual’s maturity, life experience, personality, self-awareness, and a whole bunch of other complicated factors, will determine their reaction and how they handle what they encounter. Information offered and taken is usually heated, emotional, and personally received. Everything is spur of the moment, barely any time to really consider what is being said, and true intentions of those involved are often blurred. We think because we hear it, and see it, that we have interpreted correctly simply because we were there and saw everything. We don’t often consider that we may have missed something, or don’t have all the information. And some people cannot fathom that there is a different way to think and see the world other than their own.

I literally thank God that we are all made uniquely because obviously, there is always more than one way to the centre of a circle. Meaning we all see and interpret the same things differently.

Let me use an accident on the highway as an example.

There is an accident on the freeway between Port Kembla and Berkeley. Three cars and a delivery van are involved. It’s chaos but there are several witnesses to the incident. Police talk to all of them. Due to the witnesses being in different spots at the time they witnessed the accident, every witness will have a different angle they saw it from, and their own opinion as to what they saw and who was at fault. The information gathered is compared against each other in order to create a picture of what really happened and the cause. Because people have different ways of thinking and looking at things, and not all witnesses see everything, we have a legal thing called court. All the evidence is pieced together in front of a judge, and the parties involved argue their case based on this evidence. At the end of it all, the truth is revealed and appropriate action is taken to give justice.

In recent times, I have been involved in, witnessed, and tried to ignore some horrible keyboard warrior action. Some things were aimed at me by people who believe their recollection of certain events were accurate and I was just making excuses and playing victim, trying to justify my actions.

In all honesty, anyone who has ever made a decision which has had a negative impact will try to justify their reasons. And are quite within their rights to do so. So, that comment didn’t bother me. What bothered me was their conclusions of the abusive relationships I had been in. These people, from their position of viewing while I was in these relationships, came to the conclusion that I was the issue. No matter how many times I reminded them that they didn’t see and hear everything, they just kept on insisting they knew the truth.

And that’s it isn’t it? What is the truth? Who has it and can we ever be certain of it? Especially, when it comes to others’ relationships. We are not experts in everything, or about everybody and how they live. The pretence needs to stop. I love these people very much, but their words hurt. I saw them in a different light. It gave me a glimpse into the reality that despite everything, they were still able to see something different within the same circumstances. They didn’t see the abuse. They saw a whinger, someone difficult to please, someone who always passed off blame to others and never took ownership of their own actions.

These people refused to admit they don’t have all the information and I ended up choosing to let it be. When someone is hell bent on their view being the only right one, they will never be open to new information which could challenge their stance.

Oh, how I would love to be able to put my eyes into their heads so they can see my life from my point of view! It’s hard to know the whole truth from just one angle.

Confrontations via technology are not courageous. They’re cowardly because it is often words which would never be spoken to that person’s face. If they were spoken to the person’s face, then there would be no protection from any repercussions of those words. From behind the keyboard, they don’t have to look into the eyes of the person while saying those words and see their heart break or soul shatter. They can claim their words were taken the wrong way and avoid having to apologise.

Unintentional hurt does not make it any less hurtful, or unworthy of any show of remorse from the 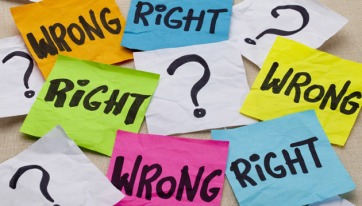 person who caused the pain. An apology never hurt anyone except maybe their pride.

One of the hardest parts of an argument, disagreement, fight, or confrontation, is admitting your own errors, misinterpretation, lack of information, or even just a lack of life experience which limits your understanding of a situation or a person’s predicament.

Another is knowing when to walk away, or allowing another to walk away. Our instinct is to continue until we are vindicated. Sometimes, we have to forgo our ego in order to preserve a more important thing – the relationship.